From Tirana to Vlora is an enjoyable trip along the Albanian coastline. However, on this trip, there are many things to do on the way. You can book the attractions we suggest and add some more minutes to your trip from Tirana to Vlora.

The archaeological park of an ancient city. Apollonia is located on the banks of the last wild river in Europe, the Vjosa River. The pillars and theater of Apollonia will remind you of the days when Greeks used to believe in Gods and built houses for them. The ancient city is part of the UNESCO heritage list. The site is very well preserved and shows you about the past. Apollonia’s Beauty has attracted many visitors. Considering Apollonia a great and important city of the past. You can see that from the ruins that are almost perfect. 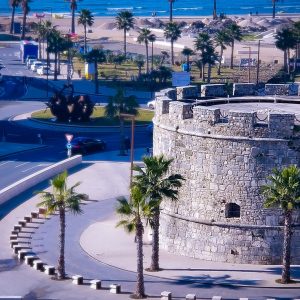 The National Park of Divjaka-Karavasta, is the largest non-coastal park in Albania. It’s a park rich in Flora and Fauna. The park consists of the Lagoon of Karavasta. The lagoon hosts 6,4 % of the Dalmatian Pelicans of Europe’s population. In this bird watching day tour in the park of Karavasta is good to mention that the park is going to leave you mesmerized. The first time you see it, the park gives you the impression as having jumped in a jungle, an unexplored land, abandoned or forgotten by the people and their destructive deeds. Its first and the only inhabitants are the animals, or better say the waterfowls.

It lays above the village with the same name, in the hill’s crest. This is a small castle that started be constructed at the beginning of the XIV century and was finished at the beginning of the XV century from the feudal family of the region, Topiajve. Besides, the castle is a ‘culture monument’. In her corners, the castle has four round towers. The watching dates from 1800 – 1850.