Attractions you can visit on the way from Tirana to Budva:

Petrovac is a town that dates back to the Roman Period and is surrounded by olive groves and pine trees. There you can see the 16th century fortress of Castello from where you can see the coast as well. This resort is the perfect gateway for the locals and is a touristic attraction 365 days a year. 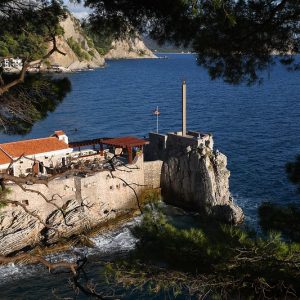 This island was once the playground for the elite people of Montenegro. Visitors visit this beautiful place just for the island’s villas hat are surrounded by the dramatic mountains, and the beautiful views they can find in this area. 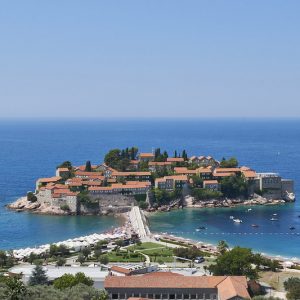 Lake Skadar or Lake Scutari is the largest lake on the Balkan Peninsula. Moreover, shaped like a dolphin its tail and 2/3 of its body is located in Montenegro and the rest and its nose are found in the Albanian part. This lake is protected by the national park since 1983. The area comprises mountains, island monasteries, and lilies.

Rozafa Castle lays on a rocky hill on the west side of Shkodra city. The city has three rivers, Buna, Drini, and Kiri. It is one of the most important castles in the whole country. Moreover, it serves as the main tourist attraction in the city of Shkodra. Furthermore, the Illyrian Queen Teuta used it as the base of her wars against the Roman Empire.

It An impressive beautiful castle that overlooks the city. Just a 200m walk uphill to see the gorgeous views it offers. Since the castle is very rich in history very little is shown in the information points around the castle so to enjoy and learn about the castle you will need a tour guide. The castle is built in various stages. But what makes it more interesting is the legend of the three brothers.

Built on Kir River in1750  by Mehmet Pasha Bushati during the 18th century. The bridge is 108 meters long and 314 m wide, including 13 stone arches is a must-see. The Mesi bridge is well preserved. It is worth the trip because such a bridge you can’t often see. Unique and 10 km from the city center. It is beautifully constructed and offers a vintage vibe. Moreover, the scenery it provides is very beautiful.

The environment is almost idyllic, framed by the hills of the Maranai Nature Park. The beautiful evergreen vegetation line the banks of a shallow river which draws swimmers in summer. The Mes Bridge, at 100 meters, is Ottoman Albania’s largest river-crossing bridge. People have been crossing the river at this spot for almost as long as humans have been here. This bridge served as a trade route between Shkoder and Pristine in Kosovo. 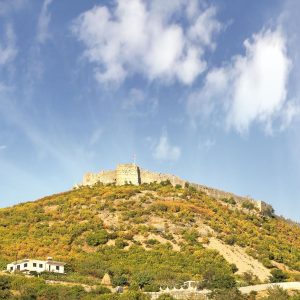 As the castle has been rebuilt over and over since year III-BC, you will still be able to see the Ottoman renovation that is in contrast with the Illyrian and Roman way of building. This castle is regarded as the biggest in Central Albania, built in Illyrian, Roman, Byzantine, and Ottoman architecture. 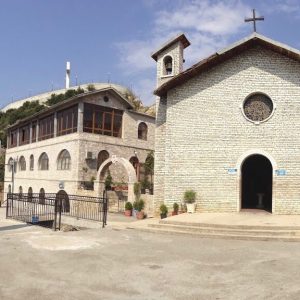 The St. Anthony Church in Lac is a Christian church.  It is a very important place where people each year from May to June 13 follow the pilgrimage route to the place because it is thought to bring good luck. A church visited by Muslims, Bektashi, and Christians from Albania and Kosovo. The first church to have all the main religions of Albania gathered in one place altogether. A holy place considered by many as the home of saints.

This historic city is 608m above sea level and offers an amazing panoramic view. Kruja is located among mountain peaks and the grassy valley reaching down to the Adriatic coast. While the region has been populated since the 3rd century B.C, it was also home to the eponymous Alban tribe as well as Gjergj Skanderbeg, the national hero of Albania.

The National Museum honors the Albanian hero as part of the great Kruja Castle and shows both the legendary hero’s history and the traditional way of life of the city’s residents. The city’s popular bazaar serves as a connection between this remarkable past and the present, offering a rich array of traditional products made by local artisans. Kruja has a long list of attractions to offer tourists from the ancient castle nestled in the craggy rocks, two museums, beautiful views, a nearby national park, holy temples, natural springs, the old city ruins of Albanopolis, and the traditional bazaar. 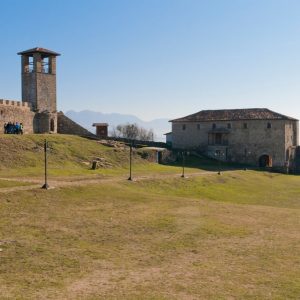 It lays above the village with the same name, in the hill’s crest. This is a small castle that started to be constructed at the beginning of the XIV century and was finished at the beginning of the XV century by the feudal family of the region, Topiajve. Besides, the castle is a ‘culture monument’. In her corners, the castle has four round towers. The watching dates from 1800 – 1850.

The mosaic was part of a Roman house since the year 3 AD. The architecture is simple. Moreover, you can see things from centuries ago. Located in Rr. Mihal Ciko in the 21st December Neighborhood.

Important Note: For each attraction that adds more time to the transfer from Tirana to Budva the price changes.

The driver speaks english and they are happy to talk and share information about history and local culture with you. They can help you connect with the locals as they speak the native language as well.

Each passanger is allowed to have a baggage and a carry on bag. If there are more it should be mentioned in the booking.

The distance between Budva and Tirana is 134 km. Which means 3 hours and 40 minutes drive.

There are many apartments and hotels where you can stay in Tirana. However, we are giving you an idea. Click here for Vila Tako-Hotel  or here for Dion Apartments.