The archaeological park of an ancient city. Apollonia is located on the banks of the last wild river in Europe, Vjosa River. The pillars and theater of Apollonia will remind you of the days when Greeks used to believe in Gods and built houses for them. The ancient city is part of the UNESCO heritage list. The site is very well preserved and shows you about the past. Apollonia’s Beauty has attracted many visitors. Considering Apollonia a great and important city of the past. You can see that from the ruins that are almost perfect. 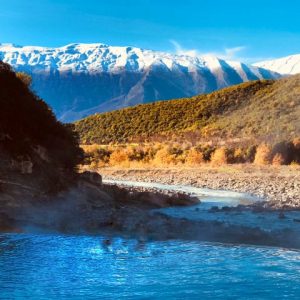 The thermal baths located in Benje Permet, are a must-see when traveling Albania. The waters with their beautiful blue color and the warmth are so amazing you will be left speechless. Located near one of the last wild rivers of Albania, river Vjosa these thermal baths are great for your health. Moreover, they are divided into different baths and they offer qualities for the body and face. Meanwhile, they are completely healthy but probably if you have heart diseases you should consult your doctor beforehand. A stone bridge arcs over the river with beautiful blue and green waters with steam.